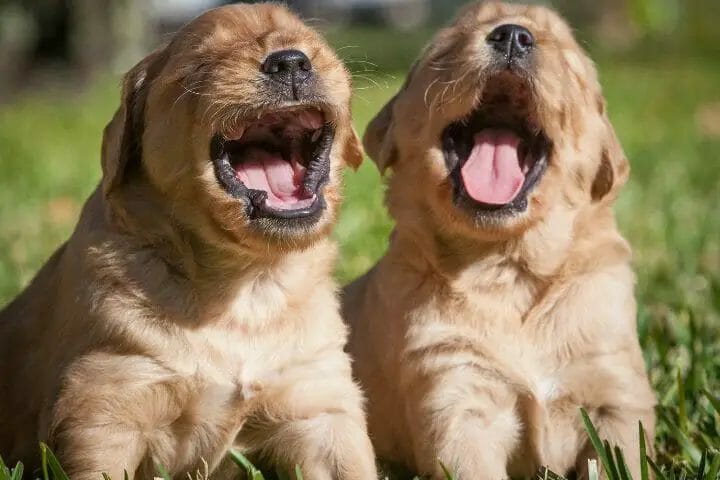 “My puppy screams when I leave the room” is a common question many new puppy parents ask each other. But don’t spend your time asking people. Here you will get all the answers.

If your puppy screams as you leave, stand outside the locked door for a bit and listen. If you’re unsure, ask your neighbors what happens while you’re gone. If the puppy whines briefly before calming down and falling asleep, it’s nothing to worry about.

He’s already learned that weeping doesn’t get you anywhere (you don’t come back), so he quits after a bit of whining. This is a good scenario since meddling might backfire and make him weep even more.

The other possibility is that the whine is only the beginning and that when you leave, the whining grows louder and crescendos into a full-fledged scream or bark.

You aren’t the only pet parent to have a puppy who becomes anxious while away and makes a noise to summon you back to break the isolation. This is pretty common with almost all puppy parents.

However, if the whining is very loud, this is a concern for your best friend’s safety. It is also inconvenient for people who live in nearby flats. You’ll need to know how to train your puppy not to whine when you leave to maintain the peace.

Why Do Puppies Cry?

Puppies are natural pack animals since they are descended from wolves. They spend the first six to eight weeks of their life with their littermates and mother in continuous company.

Their human family takes over the job of their pack when they move into their permanent homes.

Puppies have formed this pack bond with their families over centuries of living with humans, and their social habits have evolved to adapt.

However, not all puppies can master this helpful talent, and they continue to feel lonely or disoriented when separated from their pack, which is their human family.

Puppies show undesirable behavior such as weeping due to distress at the loss of their group.

If your puppy cries every time you leave the room, he’s probably attempting to express his dissatisfaction with being away from you.

Although it makes you think your puppy loves you so much that he doesn’t want to be separated from you, you must address the issue as soon as possible.

This continual sobbing and moaning are likely to drive you and your neighbors nuts over time. You’ll have to educate your tiny pup on how to be quiet and peaceful in your absence. When you leave your puppy alone, it’s critical to develop in him the habit of remaining quiet while waiting for you to return.

How to Stop a Puppy Crying?

The good news is that your puppy can learn that being alone isn’t such a horrible thing by using a few easy tactics. The trick is to get started right away, as soon as you bring your puppy home.

Although your puppy may think he’s the king of the home and likes exploring new locations, he prefers the security and comfort of his cage.

When you leave your puppy alone, he’ll moan and whine more than he does now, but he’ll readjust to his new surroundings over time and most likely count sheep until you return.

You might also like to read : At What Age Can You Use A Prong Collar On A Puppy

Giving him a safe toy to play with within his cage, such as a thick rope, as well as a puppy bed or blanket to sleep on, will help him accept the crate as his nest and keep him engaged while you’re away.

Start with modest outings once you’ve decided to go for it. It’s probably not a good idea to leave him alone for three hours soon after he takes it. Allow a friend or neighbor to come over and let him out if you’ll be gone for more than four hours.

It’s not a big deal

Saying anything as basic as being good when you leave can make your puppy frightened since he knows he’ll be left alone.

And, as much as you’ll miss your puppy when you leave, making a big fuss about it when you return may encourage your dog to become too enthusiastic when someone walks through the door. You want your puppy to think that going out and coming back is a normal part of life, not a spectacular event.

Puppies are specialists at seeming charming every day, as well as zooming around at top speed and then napping shortly after that.

If they don’t have the opportunity to expend their energy by playing and running, they will do it by barking and wailing. Play games or take your puppy for a walk an hour or two before you leave. If you leave him alone, his eyes will become so heavy that he will droop and fall asleep.

Your puppy may whimper and cry as a result of the abrupt shift of leaving his only known pack. You must begin the separation process as soon as you bring your puppy home.

You may keep an eye on your puppy but make sure he doesn’t move or follow you. Set him down in a comfortable spot, such as his playpen or bed, and take a few steps back while asking him to stay. Once he has calmed down, reward him.

Repeat the practice regularly, gradually increasing the distance and duration until you leave him alone for brief periods. According to veterinarians, your puppy should be fine being left for up to 10 minutes at a time by the age of thirteen weeks.

Encourage your puppy’s calm and collected demeanor and reward them with goodies just when they’re in that mood. Ignore undesirable behavior, like whining or weeping, and wait until calm and quiet before showering him with attention or a reward.

Before leaving their pets, many people feel compelled to say goodbye or reassure them verbally. Instead, make sure you leave your puppy alone in a room silently every time you do so. Don’t give him any hints regarding your leave.

When you leave your puppy alone, they are very attentive to any indications from you. These signals may cause them to become agitated, making it difficult for them to calm down and remain quiet once you leave.

Remember to make your return as peaceful as possible. Your puppy will be thrilled to be reunited with you, much as wolves in the wild welcome separated members with eagerness and excitement.

But, no matter how pleased and proud you are of your tiny kitty for being alone, do not exhibit joy or love right away. Allow him to calm down and relax before showering him with attention, praise, or rewards. Your goal is to ensure that your puppy sees being left alone as a routine occurrence rather than a big occasion.

Why does my puppy scream when I leave the room?

A puppy is a noisy animal that communicates with you by barking, howling, and crying. Your puppy cries when you leave the house because he doesn’t want you to leave him alone and wants you to know.

Should I let my puppy cry it out when I leave the room?

It’s better if you don’t leave your puppy to scream regularly. It’s a hazardous approach to leave a puppy to scream it out. Many pups will cry for long enough that they will need to go to the bathroom.

Do puppies grow out of crying when left?

If your puppy is crying, pawing, drooling, or refusing a reward, they are anxious and need assistance learning to calm down. It won’t happen on its own, and they won’t get over it.

Is it OK to ignore a crying puppy?

The trick is to ignore the puppy when it cries since if you approach them, they will perceive its crying as an appropriate method of gaining your attention. However, if the puppy is in such misery that it is injuring itself, it is critical to intervene.

While the sound of a whimpering puppy may soften your heart, remaining firm will help him adjust to your absence. If you return inside or respond to him while he’s whimpering, he’ll assume that his actions will result in you rescuing him from his loneliness.

Yelling at him, on the other hand, will never work. He’ll have no idea why you’re shouting. When you leave, permanently remove his collar to avoid damage. When teaching your puppy, allowing him to walk inside his kennel on his own is always the best approach. Forcing him inside the box will make him detest it.