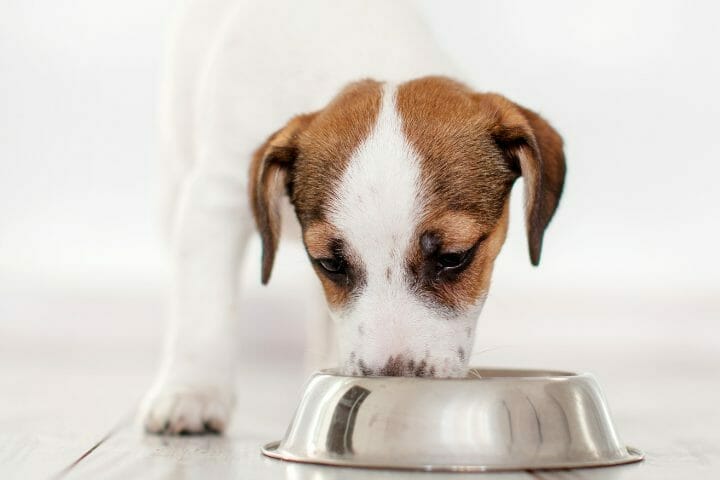 Want to know how to stop puppy from eating mulch? Don’t worry; this article has all the ways to stop it.

If you are a dog parent, you would know that dogs can eat pretty much anything they can get their hands into. From home-cooked food to lawn grass, everything becomes part of their diet.

But you must understand that dogs do not have a very strong stomach, and most of the things they eat can be really harmful to their health and upset their stomach. One of the most problematic things that dogs end up eating is mulch.

Mulch is a combination of dirt and wood chips usually used in yards for various reasons. If you find it difficult to understand why puppies eat random stuff like mulch, you should know that dogs have the mental capacity of a 2-3-year-old toddler.

I will mention the multiple ways you can stop your puppy from eating mulch but first, let’s see why puppies are so attracted to it.

Why Are Puppies Attracted To Mulch?

Puppies are always interested in new things, especially if they think that they can satisfy their appetite. It is the same case with mulch.

Mulch is an entirely foreign concept for your puppy; it is something your puppy has never smelled or seen before. For the puppies, mulch is a pretty enticing prospect.

A lot of the interest comes from their pre-existing love for certain things too. For example, puppies love to play or chew wood sticks. Most dogs like sticks so much that they always keep one with them.

Mulch is made from wood chips of multiple sizes; therefore, it attracts the puppies the same way wood attracts the dogs. In fact, it’s just not about the smell of the mulch, but many dogs also like the texture of the wood as they feel good for their gums.

Mulch is a convenient thing to chew and ingest for dogs that are obsessed with chewing. The hardness of the wood offers the right amount of chewiness that puppies like.

There can be numerous other reasons behind puppies liking mulch so much, but the things I just mentioned are the primary reasons.

Now that we have a fair understanding of why puppies get so attracted to eating mulch, let’s see why it is not recommended for dogs to consume mulch.

Why Should Puppies Not Consume Mulch?

Even if mulch seems harmless, it can actually create a lot of problems for your dog. Therefore it is highly important for you to prevent your puppy from consuming mulch at all.

The first thing, which is also a no-brainer, is that wood chips are not something dogs are supposed to eat, and mulch is filled with big and small wood chips. How the wood chips will affect your puppy depends on the size of the chips.

Minor wood chips can cause issues like perforations, intestinal blockage, and many other similar difficulties. Besides, the digestion system of dogs is not strong enough to break down solid wood.

If your dog accidentally consumes wood, it can also cause intestinal distress, indigestion, and general discomfort for your puppy, irrespective of the size of the wood.

The problem becomes even more prominent with large pieces of wood as they are even more dangerous for puppies. The increased danger is simply because large wood chips have a higher chance of sticking somewhere in the digestive tract or even the windpipe of your puppy.

So if the mulch consumed by your puppy has mostly larger wood chips, then it’s even more important to keep the dogs away from it.

Mulch naturally have a very moist nature, and therefore, they are prone to carry molds in them. Besides the presence of mold, mulch can also contain residual pesticides.

Both molds and residual pesticides can create stomach issues like diarrhea and vomiting, including other health problems like seizures and tremors, which are really bad for your puppy.

The most common type of mulch that has the highest tendency of molds is cocoa bean mulch. It also contains some toxins identical to what is found in chocolate that make it problematic for puppies.

All these issues have made it pretty clear that you need to keep your puppy as far away from mulch as possible.

In fact, as long as your dog is still a puppy and more receptive to learning new commands, you have a better chance of training it to the point that it does not have much interest in mulch anymore.

There are also many other ways to control your puppy from eating mulch that I have discussed in the next section.

How To Stop Puppy From Eating Mulch: 6 Ways

If the place from where the dog is excessing mulch is smaller, things become slightly easier for you. In this case, the simplest option to prevent your puppy from eating mulch is to restrict that area where mulch is contained. You can also keep your puppy on a leash if required.

It would help if you taught your puppy the necessary commands from a young age. Commands such as “drop it” and “leave it” are helpful beyond controlling mulch eating. These are the most basic commands for a dog to learn if it picks something dangerous.

Always be highly attentive when your puppy is going close to areas where mulch is present. Try to use the commands I just mentioned every time it tries to pick up mulch.

The most important part of this process is consistency; eventually, the dog will learn that they are not allowed to eat mulch. If your puppy is too obsessed with consuming mulch try to train these commands first using less pleasing objects and then try it with mulch slowly.

Until then, you can use other commands such as a loud “No” or shaking a can when the puppy tries to go near the mulch. Besides that, always remember to use positive affirmations like treat or praise when it listens.

Many dogs get attracted to mulch while you take them out for walks. If that’s the case, provide the puppy with something to carry. It will offer a distraction and also ensure that the puppy can’t pick up any mulch as its mouth is already occupied.

For home, buy some toy bones to chew on.

As dog mulch eating has become a widespread problem among dog owners, many garden shops and pet stores started selling non-toxic repellent sprays for mulch. The repellant sprays have a strong and bothersome taste that discourages dogs from consuming anything you spray it on.

Don’t worry if you don’t find something like this in your nearby stores as it has some DIY alternatives too, using ingredients you already have in your house. But make sure to use only the ingredients that won’t harm your plants or the dog.

Some basic DIY sprays are:

If you don’t want your puppy to eat mulch, but it’s doing it anyway, it can be characterized as misbehavior. In this case, ensure that the puppy is getting sufficient physical exercise.

Too much energy is a significant reason for the dogs misbehaving; therefore, tiring the dog out will probably solve the behavioral issues.

If you’ve tried all the methods I mentioned, but your puppy just won’t stop eating mulch, consult with a vet to ensure that the puppy has no health issues like pica causing the strange behavior. After clearing all the health issues, consult a pet behaviorist.

You might also like to read : How Long Do Puppy Crazies Last? Will They Be A Problem?

How do I keep your puppy out of mulch?

There are many ways you can keep your puppy out of mulch, with the easiest option being limiting their access to mulch if the area where mulch is kept is small. In addition, teach your puppy commands like “drop it” and “leave it” or distract it by providing toys to occupy its mouth.

How do I stop my puppy from eating wood chips?

Mulch is filled with wood chips of various sizes that can harm your puppy. Multiple ways to stop your puppy from eating wood chips include:

What happens if your puppy eats mulch?

Mulch is a combination of dirt and wood chips that are hard to break down for a puppy’s digestive system. The wood chips can cause intestinal distress, indigestion, perforations, or intestinal blockage. The molds in mulch will cause diarrhea and vomiting.

Why does your dog eat the mulch?

Dogs usually like the texture and smell of wood chips present in the mulch that feels good in their gums, and the hardness of wood is pleasant to chew. Besides that, the smell is more enticing for dogs because it is something new for them.

We hope this article has helped you learn something! We have tried to give you all the information that you need on how to stop puppy from eating mulch. Above all, remember that your pup is like a small baby.

It does not understand what things are good and bad for its health, which is why it is your job to make sure that it does not get into bad habits like eating mulch. The way forward should be with love and compassion, and you should never punish or scold your pup.