When it comes to breeding your dog and having a litter – or two – of puppies, there is a lot of information to consider and even more reading to do.

Breeding your dog isn’t exactly like humans having babies and there are a few things you will need to know about the process of getting your female dog pregnant, and some things to consider before you do it.

One of the big questions asked about breeding your dogs is whether a female can get pregnant without a tie. Well, if this is the first litter of puppies you might not even know what a tie is so let’s start there.

What is a tie?

Well, first we need to understand exactly how dogs mate as that will help to explain what a tie is. 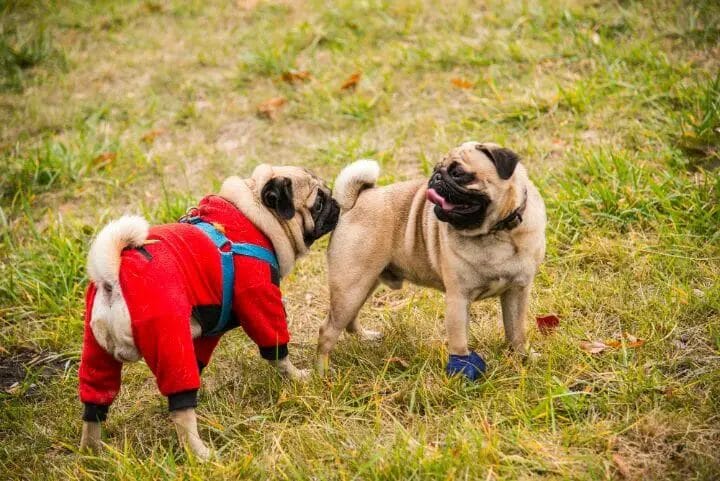 In a usual situation, when dogs mate the male will ejaculate into the female and this will be followed by a phase known as locking or being tied.

In this phase, the male’s penis will swell and gets into what is known as a knot. This knot will result in the male and female being tied, or locked, together and the male cannot withdraw from the female.

This locking phase can last for several minutes or up to an hour in some cases. It’s really important that humans do not try to separate dogs during this phase because it can result in injury to the dogs or even the humans if the dogs feel threatened by your interference. You have to let dogs finish this phase, as it’s completely natural to the breeding process of dogs.

In some cases, the male dog will withdraw before the locking part actually occurs and this is known as “slip mating”. So, can your female dog get pregnant if the tie doesn’t occur?

So, can my dog get pregnant if the tie doesn’t happen?

Well, the short answer is yes.

If ejaculation occurs then there is a good chance your dog will get pregnant even if the tie doesn’t happen. The chances of being successful with the pregnancy does decease as when slip mating happens there can be some semen that spills during the withdrawal.

The good news is that conception is still possible and even pretty likely to happen as long as the male ejaculated before he withdraws from the female.

How do you know if your dogs have mated without successfully locking?

In order to determine if your dogs have tied or not it’s important to fully understand how the mating process works for dogs.

The mating process for dogs has three phases, with the first two being very similar to human mating but the third one is unique to how dogs mate.

The male dog will has a clear fluid produced from his penis that has very little (if any) sperm in it. This phase will typically happen before the male enters the female, usually when he’s in the process of mounting her. 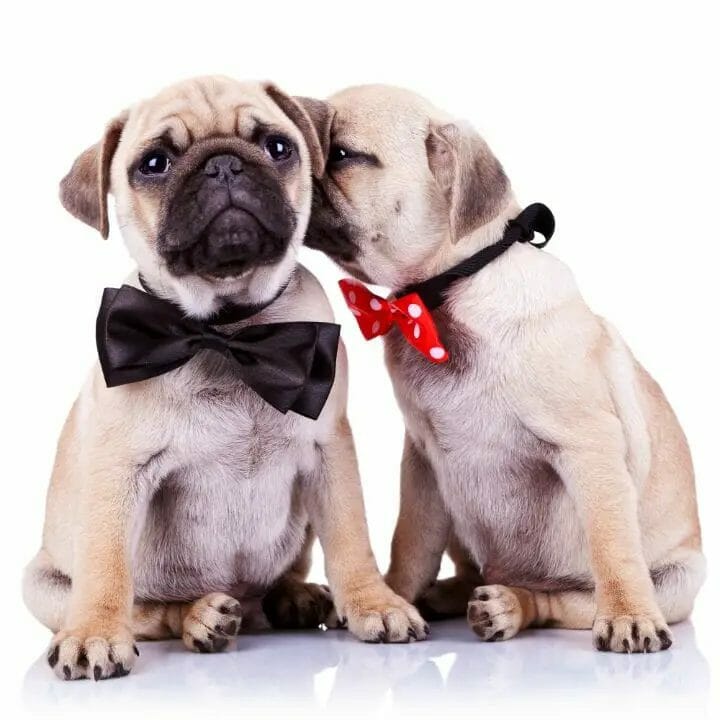 This is the phase where the lock happens. The end of the penis will enlarge and it forms the “knot”. This phase usually lasts about 15 minutes, but it could last up to an hour for some dogs. During this time the male and female remain locked, or tied, together. The fluid containing sperm is released during this third phase.

As mentioned, it’s important for humans to not try to separate dogs during this time. If you try it, you could actually injure your dogs. In some cases dogs will become very protective – especially the males – so they could feel threatened and try to bite humans. Additionally, dogs may move around and switch positions to make this locking more comfortable for them. They will naturally know what works for them, so let them finish this phase.

It is possible that the male will withdraw, or slip out, before the knot is formed but after he ejaculates. It does mean a lower chance of conception but a pregnancy is still possible and does happen in dogs.

If they don’t lock, can they try again?

Since pregnancy can occur during slip mating, there is a chance a pregnancy could happen with the first and second male. Female dogs can have puppies in the same litter from two different males.

There wouldn’t be a way to determine which puppies came from which male dog, so if you want to register your dogs with a kennel club it’s important to make sure you do not try to have another male mate with her until you know for sure she isn’t pregnant.

If your dog did not get pregnant from the first attempt, where slip mating happened, she will go through another heat cycle where you can try mating with a different male if you want to.

Can I prevent slip mating from happening?

Sometimes slip mating happens, either by accident or perhaps due to the physicality of each dog. It may happen with one male more than others, or it could be a one-time thing. So, is there anything you can do to prevent it from happening?

While it is recommended that you do not interfere with dogs while they are mating you can supervise them, and even encourage them not to move during repeat mating. The less they move the less likely slip mating will happen.

It can also sometimes be related to inexperience. With a dogs first time mating, the male and female may not know exactly how everything works until they do it. Slip mating may occur the first time a male mates but, over time, with experience, it will likely occur less often.

Additionally, if it’s the first time for a female to be mating she may be nervous or not know how to react to it. This can make the mating process a little more difficult or even cause the slip mating to happen the first time. As she goes through heat cycles, hopefully she will calm down during the process so the risk of slip mating or even causing injury after the knot happens will be reduced.

So, does this happen with other animals?

Basically, no it doesn’t. The locking phase is not experienced with any other mammals during their mating process. This is something that is completely unique to dogs.

How long until I know if the mating was successful?

As mentioned, if slip mating did happen it’s recommended you don’t immediately try to have your female mate with another male until you know for sure that a pregnancy did not occur. 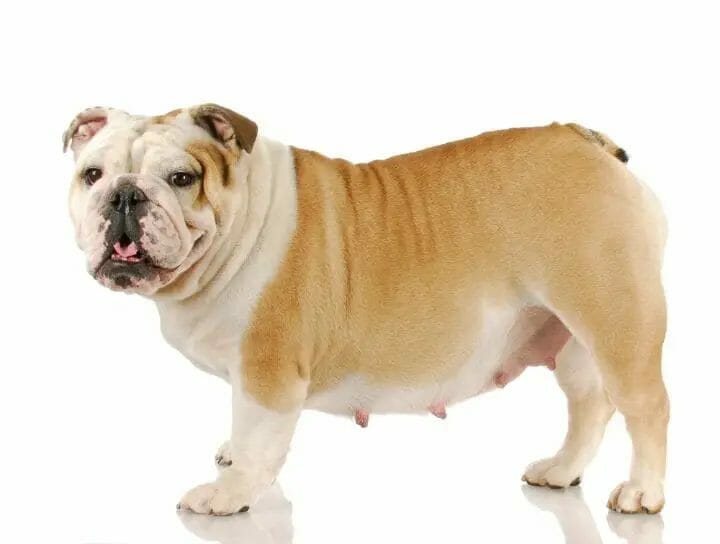 So, how do you know if your dog is pregnant? There are a few signs you can watch for.

Similar to how women get morning sickness in the early months of pregnancy, your female dog may lose her appetite in the early days and not eat as much. This can be harder to catch if your dog is a grazer naturally and doesn’t gobble food.

During the first part of a pregnancy, the nipples on your dog may grow or become much more prominent. They may also become darker in colour.

The abdominal region of your dog will start to swell and they will likely start to gain weight. Depending on what kind of dog you have, this might be difficult to notice especially if your dog has a lot of hair or is really fluffy.

A dog that is pregnant may become much more clingy than normal, or may have a few other behavioural changes. This might just translate to your dog acting a little odd or out of sorts for them. Every dog has some unique behaviours so if your dog is acting weird for how your dog normally acts, this could be a sign of a pregnancy.

If you think your dog may be pregnant, but aren’t really sure then there are ways that your vet can test for a pregnancy.

Your vet may palpate your dog’s abdomen to feel for any possible embryos. This can happen as early as 28 days post mating. Any earlier and it’s likely too soon for the vet to feel anything.

Like with human pregnancies, an ultrasound can confirm that your dog is expecting puppies. Your vet may have this technology in their office, or you may have to go to another vet’s office.

As soon as 25 days post-breeding, you can likely hear the heartbeat of the puppies. This can also be a way to confirm pregnancy in your dog.

Overall, if your dogs do not lock during their mating process there is still a chance your dog is pregnant. While it can decrease the chances of it happening it doesn’t mean that it won’t happen as long as the dogs as otherwise healthy and fertile. If you aren’t sure if the mating process worked, there are a few ways your vet can check as early as about 4 weeks post-mating.